Much has been said about turbo yeast since it came into the market. Some would claim that works like magic, while others would say that it was only fit to produce alcohol good enough to be used as paint thinner.

Nevertheless, much improvement has been done to it since it was introduced by Gert Strand of Sweden in the 1980s. By 1996, the product’s quality has improved so much that more and more people began selling and manufacturing it, and it’s even been adopted for use in some commercial distilleries.

What is Turbo Yeast?

Turbo yeast is a blend of distiller’s yeast formulation that combines yeast with a high efficacy and alcohol tolerance, with a blend of vitamins and minerals to help propagate and sustain the yeast.

This nutrient formulation is meant to assist strong and accelerated yeast growth in the fermentation stage. The yeast strain that is used in the blend is chosen for its neutral and vigorous fermentation qualities. Turbo Yeast is known to produce a yield that is higher in alcohol (ABV%) levels, done in less time.

What’s The Difference Between Turbo Yeast And Regular Yeast?

First off, regular yeast is the type of leaven that most bakers use and it is the majority of the world’s yeast consumption. It is technically a bacterium, under the species named Saccharomyces Cerevisiae. This type of yeast is not really suitable for producing alcohol since its designed to make bread, and tends to die out at high alcohol levels.

Next, the distiller’s yeast or brewer’s yeast is a particular species of Saccharomyces Cerevisiae. This type of yeast is strong enough to keep metabolizing sugar and produce alcohol, even under harsh conditions. Under the Saccharomyces species are other sub-species of yeast that produce different flavor congeners.

With distiller’s yeast, not all have the same quality and performance. So, the distiller must be specific about choosing what type of distiller yeast to use since he has to match it with the kind of spirit he wants to produce.

Turbo yeast, on the other hand, is a blend of distiller’s yeast that is made up of a more robust character and is formulated to perform better and faster than regular distiller’s yeast. The science behind it mainly depends on what nutrients you feed the yeast to make it grow faster while maintaining quality.

How Long Does Turbo Yeast Take to Ferment?

Depending on the formulation, a certain brand of turbo yeast can produce 14% alcohol volume in one day, and subsequently, raise it up to 20% in five days. This type of yeast is given added nutrients on top of the nutrients it already has, thereby accelerating growth. This type is perfect for moonshine sugar wash.

Another kind of turbo yeast can make 14% alcohol volume inside of three days, and up to 20% in seven days. This type of yeast is great for simple sugar wash fermentation.

How to Use Turbo Yeast

Note: Fermentation period may vary depending on temperature control and surrounding conditions.

We love this turbo yeast from StillSpirits since it’s good value for money, but any reputable brand will do. 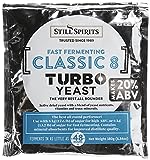 What Spirits Should I Use Turbo Yeast For?

While you can use Turbo Yeast on any type of spirit such as whisky, rum, vodka, moonshine, gin, tequila, mezcal, and others, we would strongly advise against it.

These sprits are all defined by the flavor of their ferment/wash. This means you want to taste what you’ve fermented.

Now as we’ve discussed, Turbo Yeast does create some off-flavors. It’s harsh, and to be perfectly honest, you don’t want your whiskey wash to finish at 14% ABV.

We recommend only using Turbo Yeast for making neutral spirits.

That is, a spirit that will be run multiple times, including in a reflux column to get as close to azeotrope (96% ABV) as possible.

Using turbo yeast for neutral allows us to benefit from the high alcohol, and quick fermentation properties of the yeast, without having to worry about any bad flavors it introduces into our process.

If you want to make a flavored spirit, check out our other guides for the best yeast to choose:

In Conclusion, Is Turbo Yeast Any Good?

Turbo Yeast when used properly and with caution, can be a very good accelerator of ethanol production.

It is not viable for wine and beer but is an excellent tool in making neutral spirits such as vodka and in turn, gin.

We would advise against using turbo yeast for any spirits where you won’t be using a reflux column – i.e. A pot stilled whiskey.

If you think that maximizing alcohol production in the fastest time possible sounds like a bit of you, then Turbo yeast given the right species and the right nutrition is definitely worth a try.

We’re a team of passionate brewers & distillers who want to share our learnings with others – helping answer some of the questions we had to figure out the hard way!

diydistilling.com is a participant in the Amazon Services LLC Associates Program. We also participate in other affiliate programs where we earn commissions from referrals and sales through this website.